CueBot: Teaching social cues to children on the Autism spectrum

CueBot is an educational robotic toy that caters to children on the Autism Spectrum. Through its engaging appearance and human-like actions, CueBot strives to improve how children respond to social cues. CueBot helps children use play to understand physical cues (hand gestures), as well as gaze cues (eye gestures). 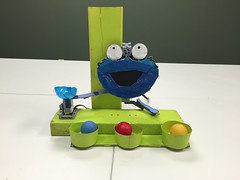 When a child approaches CueBot, the toy will make a gesture, (either a hand point or an eye gaze) toward one of three colored balls. Thus, the child is tasked with first, determining which ball is cued, and second grabbing the ball and placing it in CueBot’s extended hand. If CueBot receives the ball that it wanted, it will congratulate the child with a happy series of notes. If CueBot receives the wrong ball, it will utter a sad note, and prompt the child to keep trying until the correct ball is determined. Once the child successfully grabs the ball, CueBot will prompt the child with a new gesture.

Check out this Video to see CueBot in action.

CueBot was tested in a classroom by a group of kids of varying ages and backgrounds (ages 5-9, some on the autism spectrum, others developmentally typical). Across the board, the children found CueBot immediately engaging. Children seemed to respond well to both the physical cues and the eye cues. While the ball picking activity engaged many of the kids, children who had mastered the ball picking became a bit distracted. For these children, we implemented a version with more complexity; now, CueBot would gesture towards a colored LEGO brick, and once the child had located the desired brick, he or she would add it to a structure. This collaborative creation between child and robot engaged the children fully, allowing each child to spend more time honing their social cue recognition before becoming distracted.

The design of CueBot can be broken down into two key parts: the engaging exterior, and the core technology. The engaging exterior exists to draw in a child’s attention. Bright colors of Blue and Green catch a child’s eye from across the room. The facial features are friendly and familiar (some may say it looks like Cookie Monster, but in fact it is Doughnut Demon, an entirely separate pastry connoisseur).

The core technology is built upon the LEGO Mindstorm robotics kit. This hardware was chosen because of its capabilities and robustness. The robustness is key as children are notoriously good at using devices in an unforeseen manner, often pushing a component outside of its expected operating conditions. The hardware package allowed for easy implementation of motors, buttons, and sensors, as well as offering a clean NI Labview based software environment to build in. Our current design used two servo motors (one for the physical cue, and one for the gaze cue), one light sensor (to evaluate the color of the ball/LEGO), and three buttons (for back panel control).

The current iteration of CueBot is highly successful in a classroom setting. However, there are a few key features that could be added to improve future products. First, the child-robot interactions are currently one-sided, with the only the robot cueing the child. In order to provide an educational toy that can teach the full picture of social cues, CueBot should be able to respond to cues from the child. This would allow for the learning to take place as an active conversation as opposed to a passive instruction.

Second, it is important to remember that the end goal of these assistive technologies is to promote human to human interaction, not human to robot interactions. Thus it would be beneficial to implement a two user mode, where children could work together to respond to CueBot’s prompting. This interactive mode would be much more effective in teaching children social cues, as it might allow them collaborate and learn from each other.

Note: CueBot was designed during Tufts University’s ME0184: ‘Robotics’ course, in conjuction with CD114: ‘Children and New Tech’